Will the Pacific Northwest be a Climate Refuge Under Global Warming?

As global warming takes hold later in the century, where will be the best place in the lower 48 states to escape its worst effects?

A compelling case can be made that the Pacific Northwest will be one of the best places to live as the earth warms.   A potential climate refuge.

I will start with a clean map and highlight problematic areas as the climate warms.

Low-lying coastal areas will be vulnerable as sea-level rises 1-2 feet during the next 85 years.  Based on USGS (U.S. Geological Survey) publications (for example, the USGS threat maps below), I have indicated problematic locations in red.  Forget Florida.

Climate models are emphatic that the SW U.S. will get less precipitation and evaporation will increase as the temperature increases.  This will substantially reduce water availability for agricultural and other uses (see figure for the situation in 2050 that is in the recent U.S. National Climate Assessment). Texas, Oklahoma, Kansas, eastern Colorado, Nebraska and Florida are also heavily impacted.

Based on this document and others, I have marked up the U.S. map with yellow to indicate areas that will be highly stressed for water.

Although the latest research does not suggest that the number of hurricanes will increase, much of the literature is emphatic the the most intensive hurricanes will get considerably worse.  The regions influenced by hurricanes should not change much, as illustrated by the150-year hurricane track climatology (see graphic).  The SE U.S. and the East Coast are most threatened, and I note that more severe hurricanes can cause both  increased storm surge damage along the coast and heavy

precipitation/flooding in in the interior.  I have marked (in orange) additional locations that might be significantly affected by hurricanes.

Heat wave can be big killers, particularly for the elderly.  Here is the temperature change maps from the latest U.S. Climate Assessment

The interior of the continent really heats up, with the West Coast moderated by the cool Pacific Ocean.  So, in the U.S. map I have put purple dots for the blank locations with substantial heat wave risk.

With warming temperatures, the atmosphere will hold more water vapor, potentially leading to more precipitation.  The IPCC (Intergovernmental Panel  on Climate Change) notes considerable uncertainty on the distribution of resulting flooding, but the U.S. National Assessment notes that the biggest increases during the contemporary period has been in the Midwest (see graphic).

My own research has suggested that atmospheric rivers could be enhanced under global warming, which might result in increased flooding, but only near major rivers draining western U.S. mountains. To denote that risk I will put a few green dots on the map.  No issue for Seattle assuming the Howard Hansen dam is properly maintained.

There are many other, more minor, issues that I won't deal with here.  According to the U.S. National Climate Assessment, ticks capable of  transmitting Lyme's disease could become far more prevalent in the Midwest under global warming (see graphic)

So what conclusion does one inevitably reach by studying the IPCC reports, the U.S. Climate Assessment, and the climate literature?

The Northwest is the place to be during global warming. 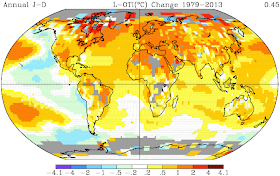 Temperature of the eastern Pacific, which controls Northwest weather, have been COOLING the last 35 years (blue color)

Several media outlets have noted that the Northwest and its principal city, Seattle, should be particularly good places to ride out a warming planet.  Here is an example:

Portland State University has also done a study suggesting that the Willamette Valley will be a magnet for the global warming migrants: 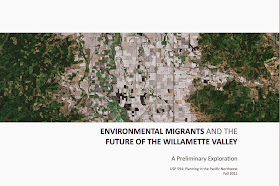 Yes, the Northwest may well become a climate refuge during the upcoming century.
The big question?

How do we keep the Californians out?   One idea is shown below. 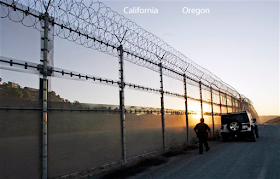