Are More Wildfires the "New Normal"?

UPDATE:  Here are the latest cumulative statistics of the number of acres burned over the Northwest by the National Interagency Fire group.   After a low fire season, we are finally at normal...and according to their projections, we should stay that way, helped by incoming cooler weather.

The media has a tendency for pack behavior.   And the current favorite is to suggest that the fires hitting the Northwest is "the new normal."

That we can expect years in our immediate future to be like this year because of anthropogenic global warming.   With all the smoke and fire around eastern Washington and Oregon it sounds compelling, right?

The trouble is that it is clearly not true.

There is no reason to expect that greenhouse gas-caused warming will produce more fires during the next few decades, although the story changes as we get to the end of the century.  Let's look at the situation more carefully.

There are a variety of ways we can show why the "new normal" hypothesis makes no sense.

As I have discussed in several of my blogs, the last year has been crazy warm, a huge anomaly from normal.  If the area was drying and warming due to the steadily growing greenhouse gas concentration in the atmosphere, one would expect a long-term trend in temperature, dry surface conditions, and snowpack.
But no such trend exists.

Let's start with snow pack, since a lot of the media have been claiming that low snow pack is a major element of this year's fires (something my friends in the wildfire community do not support by the way).  Here is the amount of water in the Northwest snow pack (SWE) for the last 30 years.  The blue lines are the annual value and the red is a smoothed curve of this data.

The snowpack on April 1, 2015 was the lowest on record.  But it is an outlier and there is little apparent downward trend over the past three decades.  This is not the kind of variation you would expect if global warming was the culprit. 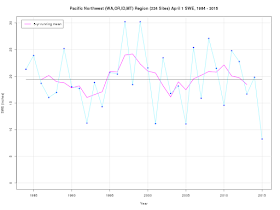 What about temperature?  Here is a plot form the NOAA "Climate at a Glance" website showing May-July temps over Washington State.  2015 is the warmest, although 1958 was close.   But there is really very little upward trend. 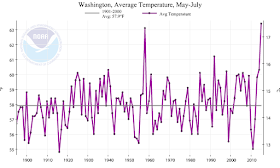 Let me show highlight by getting rid of 2015 and before 1925 when the record was not reliable.  You see much trend?  Not really. 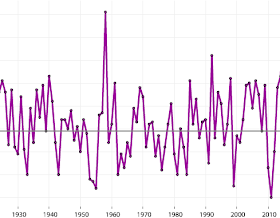 What about the trends of July temperatures over the eastern slopes at the Cascades, say at Ellensburg and Wenatchee from 1925-2014?   Here they are.  VERY small warming trend. 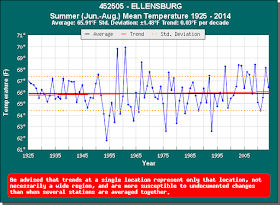 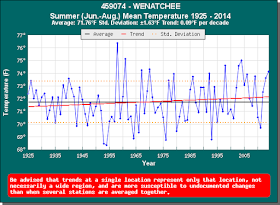 So this year does NOT represent the culmination of a trend toward heat waves and low snowpack, but a huge anomaly, one that is associated with natural variability.

We can come to the same conclusion from basic physical understanding of the climate system.    Our extreme weather has been associated with a very anomalous configuration of the upper level flow, with a huge, persistent ridge over the West Coast and a trough over the east.  The eastern U.S. has been far COLDER than normal.

As I have discussed in previous blogs, there is no reason to expect such an amplified wave pattern with global warming.   Global climate models forced by increased greenhouse gases don't show this behavior.  Careful studies of changes in the upper flow during the past half century do not show it.  Theoretical work suggests that this hypothesis makes no physical sense.   One or two authors have pushed this idea ("the lazy jet theory") but their work has been thorough disproved in the peer-reviewed literature. 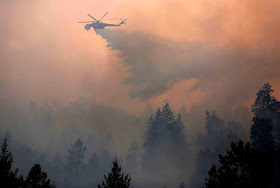 Picture of the Chelan Fire, Courtesy of the Seattle Times

The bottom line is this:  the extreme snowpack and temperature conditions this year was a huge anomaly driven by natural variability.  It is not a "new normal".  Next year, even though it will be an El Nino year will undoubtedly be less extreme.

Global warming WILL be a serious issue for the Northwest, but that is in our future.   This year gives you a taste what the temperatures and snowpack will be like at the end of the century.  The cause will be different, but the end result will be similar.  We must prepare for the conditions of the end of century, but we will have decades to do so.

Is there an upward trend of wildfires in the U.S?  The answer is no.  Here are the latest year to date wildfire numbers for the U.S..   Actually less fires this year, but acres are up...but there is no trend.

A graph from the Seattle Times showed the same thing.  Interestingly, the ST had an updated version in the print version and online...but the online version disappeared.  I won't comment on why they removed it.

Regarding the eastern Washington wildfires, there is another issue.  The eastern slopes of the Cascades have burned for millennia.  Wildfire is a central part of the ecosystem there.   Too many folks have moved into the hills above Chelan, Wenatchee and elsewhere, putting themselves at risk.

For example, go to GoogleMaps and explore around Chelan area with their satellite option.  They are many homes up in to the hills, located where no one should be (see below).   Just as folks should not build homes near frequently flooding rivers, no one should build homes were frequent fires have raged over thousands of years.

Another issue, mentioned by Dave Wilson in the comment section below, is poor timber management practices along the eastern Cascade slopes.  Contemporary eastern slope forests are very different than the originals, which were far less vulnerable to massive crown fires.  And, of course, having large numbers of people throwing cigarette buts and fireworks into a flammable environment is hardly natural.