Sometimes the good guys win.   Today is such a time.

A few hours ago, we learned that Pacific Lutheran University (PLU) has agreed to sell popular public radio station KPLU to a community group (Friends of 88.5) for 7 million dollars in cash, plus 1 million dollars in underwriting.

Against great odds, the Puget Sound community said no to a sale of the radio station to University of Washington's KUOW, which longed for a regional public radio monopoly and KPLU's transmitters/frequency allocations.

This is not just a western Washington local triumph, but an achievement of national implications.

It is about a community that said no to the loss of diversity in local news and regional programming.   No to the trend of corporatization and nationalization of local content.  Yes, to valued and unique jazz and blues programming.  Yes, to distinguished local news coverage. 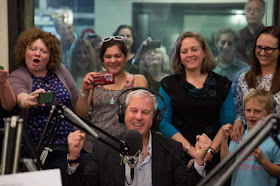 A record breaking amount of money was raised while an army of naysayers said it was impossible.

And the community showed the extraordinary power of social media to dissuade bad decisions of even the most powerful local interests.

The story of the saving of KPLU has the breadth and interest to make a compelling novel, with twists that would inspire a Hollywood screenwriter to think about the movie potential.   It has greedy/deceptive villains.  Moneyed and powerful interests wanting to get their way.  Secret deals.  Heroes and heroines.  A Hail Mary attempt to save the station that worked.  Record breaking fundraising.   Covert KUOW emails revealed in the press.  Fight Club. The participation of thousands of listeners and supporters.  The innovative use of social media.  Leadership and staff at KPLU that would not give up.   And even gunfire in a Seattle Public Library branch.

It is a story so unusual and far fetched that most would think it was a tall tale.  But it wasn't a story...it was real.  And KPLU, whatever it will be called in the future, will provide regional listeners and jazz/blues lovers from around the world with the programming they love for many years to come. 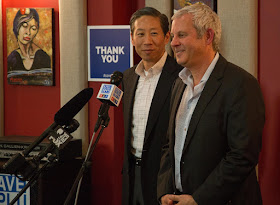 For me, the most interesting questions deal with the future.

How will KPLU evolve and grow as it becomes an independent entity, unfettered by their connection with PLU?    KPLU management has learned deep lessons about the importance of community engagement and the value of close ties with its listeners.   I suspect those lessons will have profound effects on the trajectory of the station.

For KUOW, this failed hostile takeover attempt of a valued local public radio station should stimulate deep reflection and reform.  KUOW management worked on a secret agreement to buy KPLU, skirted public meeting laws to keep the public uninformed before a UW Regents meeting, planned on using pledge money acquired for KUOW operations for the takeover bid, and wasted large amounts of money on a jazz outlet meant to put pressure on KPLU.

Perhaps even worse, KUOW management has stripped most of the local programming from the KUOW weekday schedule, filling the hours with bland nationally syndicated material.   It is time for KUOW to reappraise its programming,  bringing back much more local content.  The rich resources of the University of Washington should be entrained into the on-air material, and the management of KUOW improved (clearly the KUOW board has been ineffective at best). And there should be many opportunities to join forces with a resurgent KPLU.

KUOW can become a far better public citizen and regional news organization.   And to do so, it would be advised to follow the model of integrity and listener engagement so evident at KPLU.