Here are the maximum winds during the last 24 hrs, which gives you a feeling for what occurred.  Gusts to 60s and even 70s mph on the coast, 30s to 40s over the interior, with few locations getting into the 50s. 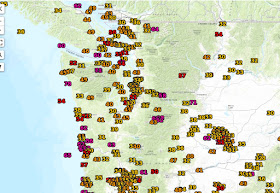 One of the most interesting aspects of the event was the intense line of thunderstorms/convection that moved through around 6:30 PM (see radar image below)

As I will describe in a future blog, this was not a failure so much of the models, but of communication of uncertainty.    My profession has to stop providing the worst case or most probable weather evolution, but provide society with full probabilistic guidance.  Yesterday was a good example of the failure mode when we do not.   The media, such as the Seattle Times and several TV stations, were happy to hype up the storm because of all the interest in such events.   Many events were unnecessarily cancelled or postponed, some on Friday or Saturday morning when there was no chance of strong winds.

The key facts are this:

1.   By two to three days ago is was clear that there was no chance of a Columbus Day storm event. Prior to that, some model forecasts suggest it.
2.    It was clear that a small-sized, but intense low center was going to pass through our region.
3.    A small track error (say 50-100 km over a day) would radically change the forecast at any particular location.
4.    Such a small error was well within forecast uncertainty as revealed by our ensemble (many forecast) systems.
5.   Local meteorologists warned of the worst case situation, but failed to communicate the uncertainty of the prediction.   I tried to talk about track errors, but it is clear that I needed to do much more.