Starting Thursday, we will enter a period of extraordinarily active weather with the potential for heavy rain, flooding, and a highly dangerous windstorm with the potential to be an historic event.  The coastal waters and shoreline areas could well experience hurricane-force gusts, with a lesser but serious threat for strong winds over the interior.  Keep in mind that there is still uncertainty in the forecasts, more so for the wind than the rain.

So much intense weather is going to hit us, that I don't know where to start...but let me try.

On Thursday afternoon, a strong Pacific cyclone, with a 982 mb central pressure will approach our coast, with a huge pressure gradient and strong winds to its south (see 5PM forecast of sea level pressure, surface winds, and lower atmosphere temperatures--in color below)

As the low swings north of us, it deepens further to 973 mb, with a very strong pressure gradient over Puget Sound (see map at 5 AM Friday morning below) 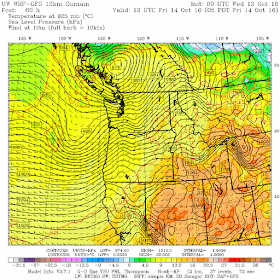 Winds along the coast and over NW Washington will be very powerful.  To illustrate, here are the predicted wind gusts at 2 AM Friday morning.  Gusts to 50 knots (57 mph) along the coast, near the Sand Juans, and over portions of Seattle.  Expect a lot of power failures.  Be prepared. 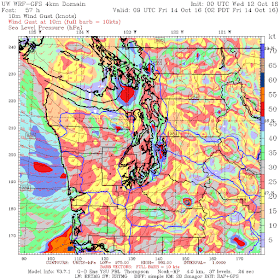 Associated with the low is a strong atmospheric river of subtropical moisture streaming across the Pacific and aiming right for us (see water vapor map at 11 AM Thursday).  Blue are very high values.

As the moisture rides over our terrain, heavy precipitation will result.  Here is the forecast 48-h total ending 5 AM Friday.  5-10 inches over the Olympics and the coast mountains of the Northwest.  1-2 inches over Puget Sound.

Now in most years, the events along would be impressive, representing one of the strongest events of a typical winter season.  But folks, this is just a warm up for the real action on Saturday.

A true monster storm, potentially as strong as the most powerful storm in NW history (the Columbus Day Storm of 1962) will be approaching our area on Saturday.  The UW WRF sea level pressure forecast for 5 AM Saturday morning shows the approaching cyclone.   The central pressure is an amazing 961 mb, with an unbelievably strong pressure gradient around it.

The predicted sustained winds (not gusts) at that time show 50 knots or more more wrapping around the low center.

During the next 12 hours the storm strengths further to 955 mb, the same as the extreme Columbus Day Storm. Sustained wind over 55 knots.

This track is not optimal for the strongest winds over Puget Sound (the low would have to cross the NE Olympic Peninsula to do so and head towards Victoria), but the storm's large size and strength will bring 30-50 mph gusts around Puget Sound.  As shown in the sustained wind forecast for 7 PM Saturday, the winds are much stronger on the coast and over NW Washington  (like the San Juans).

If the models are wrong and the storm's track heads further east, Puget Sound could get a very major hit with massive power outages and damage. This is a very dangerous storm.

As a check on this solution, I took a look at the ECMWF forecasts (ECMWF typically has the best forecasts).  As shown below, the same idea. 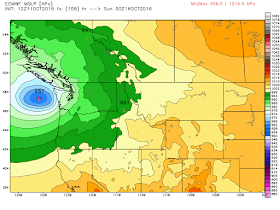 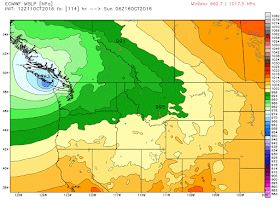 With such a storm expect HUGE waves over the eastern Pacific.  Here are the latest forecasts from the NOAA WaveWatch III system for 5 PM Sunday.  Wow.  12-14 meter (40-45 ft!) waves.  If you are near the coast, be very careful--although there should be some great wave watching in safe locations. 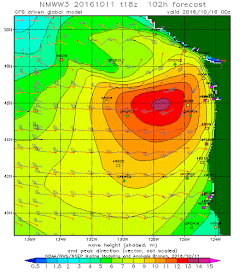 The Saturday storm is not only nearly as intense as the 1962 Columbus Day storm but shares a common origin:  both started as typhoons over the western Pacific.    The Columbus Day Storm had its origin as Typhoon Frieda, taking over a week to get across the Pacific (see track of the Frieda/Columbus Day Storm below)

Our Saturday storm started as Typhoon Songda, which is now moving towards us as it transforms into an extratropical (midlatitude) storm.   Both of these storms retained some of their tropical "juice" with lots of moisture and tight, strong low pressure centers.

To prove the tropical connection, below is a sequence of forecast maps of sea level pressure and pressure from the US GFS model. Follow the storm as it crosses the Pacific. 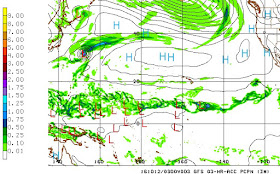 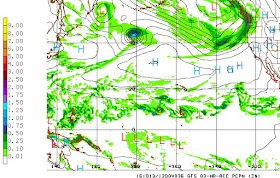 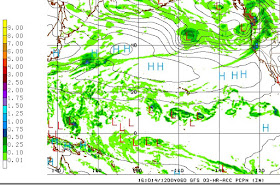 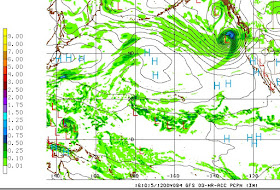 Scary similar to the Columbus Day storm except the track is further north and thus not as "favorable" for the strongest winds over Puget Sound.  And did I mention the rain?  Much more rain in the subsequent 48h that I showed above:

My head is spinning with the action that may be occurring around here.  Remember, although the model solutions are fairly stable now, there is still considerable uncertainty regarding the storm's trajectory and intensity.  The could shift north or south, with major impacts on who gets the big winds.  Consider that we are forecasting a storm that has to travel across the entire Pacific;  a hundred mile error in track greatly alters who gets strong winds.  But have your storm kits ready and keep track of the forecasts.

Addendum at 6 AM Wed.

The infrared satellite imagery shows an amazing plume of moisture across the Pacific leading to Typhoon Songda.  Never saw anything like this:

I strongly support I-732, the revenue-neutral carbon tax swap, which help reduce Washington State's greenhouse gas emissions, make our  tax system less regressive, and potentially serve as a potent bipartisan model for the rest of the nation.  More information here.   I will be talking about I-732 on Sunday, October 16th at 11 AM at the Unitarian Church in Edmonds. 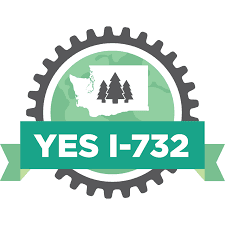