David New of Jones Engineers in Bellingham sent me an interesting email about the flow in some of our local streams.  Specifically, their flow is heavily modulated by the outside temperatures, with warm temperatures causing snow melt that surges downstream.   You can see the daily (diurnal) variations as snow melts during the day and surges downstream later in the day, producing a midnight maximum of flow.

We start with an unusually high snowpack for this time of the year (see graphic), with some regions at 200% of more of normal. 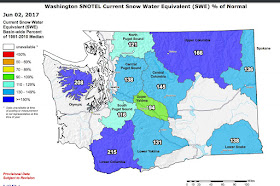 And our temperatures have varied substantially (Sea-Tac temperatures shown below), with a a particularly warm period from May 26-29th.   So there was a lot of melt during that period, with less during the near-normal temperatures of the past few days.

Let's consider Pilchuck Creek, found along the Snohomish - Skagit County line and includes Lake Cavanaugh. It drains 75 sq. mi. upstream of I-5, with the highest point in the basin just under 4000 feet. It is just under 20 miles from the remaining snowfields to I-5. The gauge data is from a Dept of Ecology site near I5 (see map) 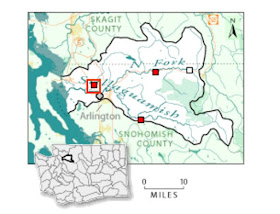 The streamflow at that site from May 26 through June 1 (below) shows large flow and large daily variations during the warm days (May 26th-May 29th), with a maximum value near midnight (the vertical lines are at 5 PM).   But as soon as the weather cooled, the streamflow declined, as did the magnitude of the daily modulation. 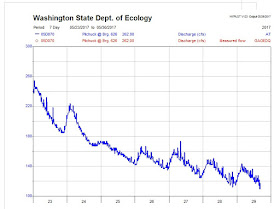 The temperature of Pilchuck Creek also varied substantially (see below), with large swings of temperature during the warm days.   The lowest temperatures matched those of the largest flows near midnight, with temperature peaking during the afternoon.  On the the warmest day (May 28th), the stream's temperature varied from 14.2 to 18.2 C, a change of 4C (or roughly 7F) 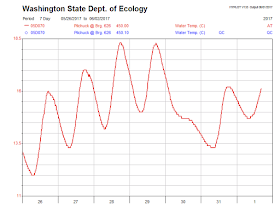 The streamflow at Pilchuck Creek over the entire water year (since October 1) is shown below.  Lots of variation forced mainly by rain events, but melting also produces variability.  The snowmelt variability is small potatoes compared to the storm events. 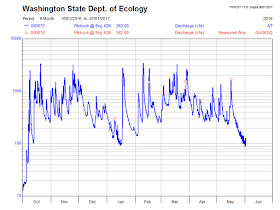 What about the temperature of the water over a longer period?  Here is the water year plot. The coldest temperatures were in early January (around 4C), with water temperatures zooming up to around 16C today.  Keep in mind that bigger rivers can be much cooler. 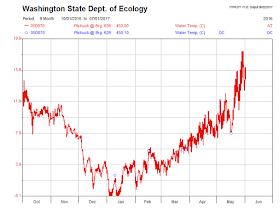