Welcome Rain is On the Way

After a very wet winter and early spring, I can't believe that I am looking forward to some rain....but it is true.  Digging in my garden, the soil is dry to some depth and many folks are already starting to water.  And the recent warm temperatures have greatly increased evaporation from the surface.

The precipitation for the past 4 weeks at Sea Tac (see below, red line is observed precipitation, blue line is normal), tells the story.  After a relatively wet period during mid-May, the rain gauge nearly flatlined during  the last two weeks.

In fact, the percent of normal precipitation over the past two weeks (see below) shows way below normal rainfall (red colors) over much of the western U.S.

Today's temps were well above normal, with a number of sites getting into the mid-80s around Puget Sound and SW Washington.  You don't want to know about Portland and the Willamette Valley. 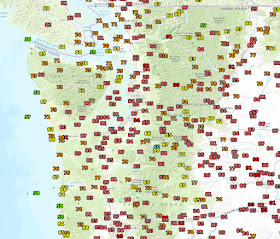 The clouds are associated with a huge upper trough of low pressure that will amplify over the eastern Pacific.  Here is the impressive upper level height forecast for 8 AM Friday---pretty amazing for this time of year.  A strong jet stream (where the lines are close together) pushes far south into northern CA.

However, the next 24 h (ending 5 AM Friday) is far more impressive with more than an inch in some of the mountains and even eastern WA getting some moisture.   You won't have to water your garden for a few days.

The latest 51-member European Center ensemble of 24h precipitation forecasts (see below, courtesy of WeatherBell, Inc.) indicates great certainty that it will rain, with nearly every forecast member going for precipitation.    And most keep it going on and off for a few days. 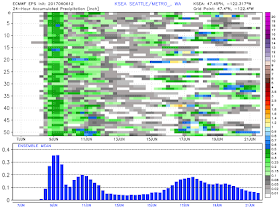 You won't need an air conditioner or a fan after tomorrow for quite a while.

Wednesday will get near 80F for some, but after that we will fall into the 60s for a least a week.