Finally! A Transition to Cool/Moist La Nina Conditions in the Northwest

A warm front is moving through Washington State now, with a freezing level of around 8000 ft.   Rain is falling in the passes, and even the ever-positive Snoqualmie Summit snow report talks about " soft slop." 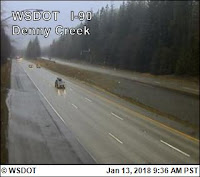 The last few days have been substantially warmer than normal , as shown by the observed temperatures at Stampede Pass (4000 ft) in the WA Cascades (normal highs and lows shown by purple and cyan).  Really warm today.

But I have some very good news for skiers and snow lovers: a major shift in the hemispheric flow patterns will result in much cooler/snowier conditions over the Northwest next week.  And much wetter over California.

Finally, we will see a more La Nina-like pattern, something that typically occurs in early January when a La Nina is in place, as it is this year.

Let me show you the upper level flow pattern for the next week, and for a change I will present the heights and winds at 300 hPa, roughly 30,000 ft:  the elevation where jets tend to fly and where the jet stream is often strongest.  Heights (like pressure) are shown in black and the wind speeds are color-shaded.  You can see the jet stream core by looking for the high speed areas (yellow and orange).

Today at 4 PM shows a big ridge of high pressure (high heights) over the western U.S.   Warm and relatively dry for us.

Fast forward to Monday at 4 PM shows the shift:  the ridge has moved inland and the core of the jet is moving south towards California.

By Wednesday at 4 PM, a strong jet stream is approaching Oregon, with Washington on the cold side (good for snow here).

And the jet moves farther south on Thursday.

And even farther south on Saturday...heading into the U.S. southwest.

The flow pattern this week will bring substantial precipitation to the West Coast, importantly including California.  We will cool down and substantial mountain snows are expected.

For example, here is the snowfall total from the UW WRF system for the 72 hr ending at 4 AM next Saturday.  Snow from the Sierra Nevada to southern BC.  Above 4000 ft there were be several feet of snow in the WA Cascades.  Southern BC mountains will be hammered.

The precipitation totals for the same period show 2-5 inches of liquid water equivalent over much of the western coastal terrain.

Good for water resources, good for skiing, and good for putting away the fire threats in the western U.S.  And with days getting longer, most folks won't mind the clouds.
Cliff Mass Weather Blog at January 13, 2018
Share