Was This the Driest Summer in Northwest History?

A dry Pacific Northwest in July and August is the normal state of affairs, but this year was particularly arid.

Some media outlets have claimed this is Seattle's or the region's driest summer on record.  Is that true?

What about a nearby station with a longer record (Kent), going back to 1912?  That is shown below with a trend line.  2022 was the driest summer on record but some came close in the 1925-1945 period.  The trend shows a slight decline (maybe a half-inch) over 110 years.  The very small long-term trend will turn out to be important.

What about east of the Cascades?   This is important because of the agriculture there and the frequent wildfires.   A different story from the west.
Spokane (going back into the late 1800s) was dry but six other years were drier.

And Kennewick, also with a record going back into the late 1800s, was not exceptionally dry at all, with 29 years more arid.

So what can we conclude?  Western Washington was exceptionally dry this summer. The driest on record for many stations.  But there is only a minimal trend toward more dryness west of the Cascade crest.   Eastern Washington had a dry year, but it wasn't exceptional.
Let me stress, there is only a slight trend toward drier summers in our region.
That is important, because if climate change is the cause of the dry conditions you would expect to see a long-term trend.  If a very dry summer like this year was caused by climate change, there would be a long-term trend towards much drier summers.  There isn't.
What do climate models suggest?   Here at the UW we are running high-resolution regional climate models driven by a collection of global climate models.  This is the gold standard of such work.
Here is the prediction for summer precipitation (in this case June-July-August) for Seattle and Pasco driven by a VERY aggressive increase of greenhouse gases (the RCP 8.5 scenario) for 1970-2100.  Climate models suggest VERY little change in summer precipitation through 2022 for either station.  For Seattle, there is a slight decline in precipitation by 2100.  Virtually no change in the Columbia Basin. 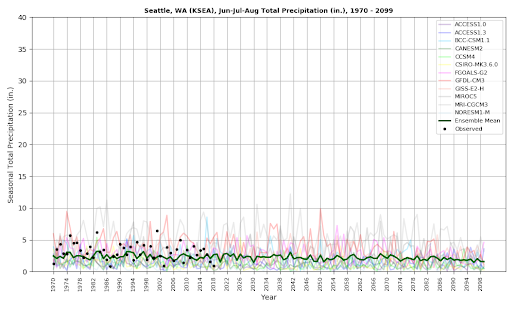 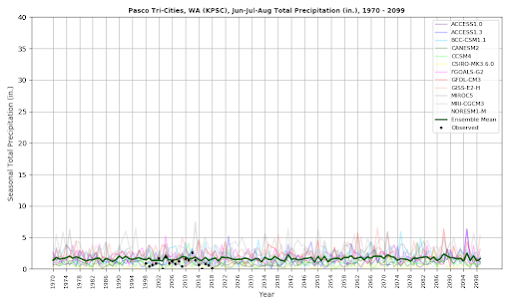 So what should you conclude from all this?
We had a very dry summer in western Washington.  But there is little overall extended trend, but plenty of variability that is probably natural in origin.   This is supported by climate model simulations that show little change in summer precipitation even with large increases in greenhouse gases.

Like last year, I am teaching atmospheric sciences 101:  a general introduction to weather and climate, this fall.  You can learn more about the class on the class website.  I talk about everything from the basics of the atmosphere to weather prediction, thunderstorms, hurricanes, and local weather to global warming and climate.

I will be teaching the class in person at the UW, but will also make it available over zoom.  Thus, folks can take it remotely.

If you are over 60, you can take the class through the ACCESS program for a very nominal charge (something like $15).   Last year I had over 125 folks do so.

So if you are a UW student looking to learn about weather or a non-student interested in the topic, I welcome you to join me this fall.  My first class is on September 29th.