Today, Governor Inslee made an important announcement that will put a smile on the faces of local environmentalists: many of the coal trains that have been plying our region will be adapted to carry snow from the eastern and central U.S. to the Pacific Northwest.   Coal trains will be turned to snow trains, and as shown below, the first snow trains are rolling. 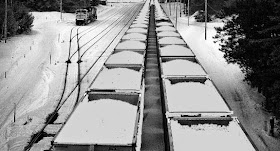 During the past several years it has become obvious that global climate change is here and that a major impact will be increased snow in the eastern U.S. and drought in the west.  The President's Science Adviser, Dr. John Holdren, described this situation in a number of high level briefings in which he described the impacts of the global-warming-induced polar vortex.

Using his executive powers and the recent declaration of CO2 being a pollutant, the President has put sufficient roadblocks in the way of West Coast coal export terminals (such the proposed GPT terminal north of Bellingham) that virtually all have been cancelled.  But a huge number of double-walled coal cars have been built in expectation of coal exports, potentially devastating the bottom lines of Burlington Northern and other train companies.   As a result, these companies have offered an alternative idea: to transport snow from the east to the west by rail, solving two problems at once:  where to put the excessive snow pummeling the east and how to deal with the snow drought in the west.  And the double-walled coal cars can act as insulating containers that allow the snow to travel long distances with little melting during the winter.

Skiers will be particularly delighted to learn of the terminus of the first snow trains:  Steven's Pass, a ski area with a rail line nearby.    The first snow train (above) has already delivered a load of snow to Steven's with bulldozers pushing snow up the hills (see pictures).   In an interview with the Seattle Times, Steven's General Manager Hal Burton said " I am beyond words in praise of those who conceived of this grand idea.  We expect to open by the weekend" 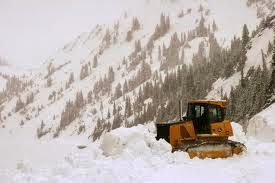 As the snow melts during the spring, it will drive flow into local rivers, supporting agriculture and fisheries.    The director of the Washington State Department of Ecology, Maia Bellon, also noted another positive of the snow trains: " the melting snow interacting with Cascade soils will have a relatively high pH and greatly lessen the threat of coastal ocean acidification in our region."   Furthermore, the energy needed to melt the snow will reduce the global warming of the region by roughly .1C, according to Dr. Phil Mote, Director of the Oregon Climate Center and an expert on Northwest snowpack/climate interactions.

Snow trains will be a big part of the future of the Northwest and should ensure plenty of mountain snow for years to come.