Imagine frigid frosty temperatures in the low 20s in the morning and then a few hours later the mercury reads near 80F, suitable for a dip in an outdoor pool.  Amazingly enough, 50-60F air temperature swings are not rare around our region during the late summer and autumn, particularly in what I will call the frost region of the Northwest:  valleys in the high plateau of eastern Oregon.  And before I get done with you, Crow Flat will be a place you will not forget easily.

Let's start by looking at the minimum surface air temperatures this morning around the region (see map).  A large range, with lots of stations dropped into the lower 50s and 40s.   And the 17F on the Olympic Peninsula is clear wrong.   But look at central eastern Oregon, there are temperatures in the 30s and 20s!

You can see those low temps more clearly in this blow-up map.  The  Bear Valley region is particularly cold.  Bears like cold temperatures, I understand.

The coldest location is the Crow Flat site with 22F.  Here is the temperature plot there for the past week at that location..  Yesterday had a 60F temperature range....amazing.   That could crack come concrete!

The Crow Flat site is shown below 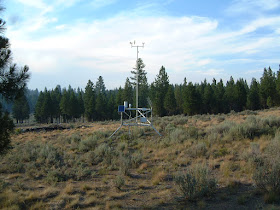 Nice open location above natural vegetation at an elevation of around 5000 ft.  Importantly, it is in a hollow or low spot, with cold air tending to settle into such valley locations (see topo map)

So with clear skies last night and much longer nights this time of the year, the ground is able to radiate heat to space effectively and for a long time.  The ground cools the air above.  The radiational cooling is enhanced by the very dry air over that region (dew point was about 20F).  Moist air can act as a radiational blanket--that is why deserts have big diurnal (daily) temperature swings.  Particularly cool air pools into hollows and low areas, such as Crow Flat in the Bear Valley region.

On the other hand, the sun is still fairly strong this time of the year and the air temperatures aloft remain warm, so with clear skies the surface heats rapidly during the day.  Look at the temperature traces above.....the air warmed abruptly during the AM.   A list of the temperatures and dew point this morning also show this.  The air warmed from 26F to 60F in two hours, between 8:07 and 10:07 AM. That would wake you up.

Very few people live in the Crow Flat area of Oregon, which is just fine with its other residents, who like peace and solitude. 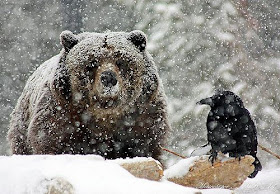