Local efforts dealing with Northwest climate change have not been successful.
Even worse that that, our region is not even prepared for our CURRENT climate.

Let's talk about some of the failure modes:

1.  Our governor has failed to secure a carbon reduction plan.
2.  Wildfires are burning homes and ranches.
3.  Agriculture in parts of eastern WA is stressed for water.
4,  Traffic is choking major Northwest cities and rapidly getting worse
5.   Floods and landslides are killing our residents and doing substantial damage.
6.   Coal and oil trains are increasing on our rail lines and a major coal port is being planned in      Bellingham.
7.  The two political parties are not working together on environmental issues.  Rather, there is antagonism and name calling.

We need to try something different.  We must find a more effective approach to dealing with environmental/climate challenges.  These are not Democrat or Republican issues.  Liberal or conservative questions.  They affect all of us. And we will only make progress by working together in a logical, bipartisan way backed by the best scientific knowledge.

If I was the state environmental czar this is the program I would push.

1.  Get the best information possible on our current climate and how it will change this century

The truth is that our citizens, government, and businesses should have much better climate information than currently available to deal with current environment threats and to prepare for future climate change.

First, we need good climatological information: what has happened and is happening.   To do so, we need a strong Office of the Washington State Climatologist (OWSC), that has the resources to bring all the data together and make it highly accessible.   The current office does a wonderful job with what resources it has, but it is understaffed and underfunded.  The State should do better.

Second, we need to use state-of-the art science to determine what climate change will bring to our region.   As I noted in a previous blog, this will require more sophisticated regional climate modeling that is quite achievable, but currently prevented by lack of resources and organization.

Third, we need a strong effort that helps users and governments  to understand and apply climate information and model results.   This is something that the currently understaffed UW Climate Impacts Group could do.

Fourth, some media and advocacy groups are hyping and distorting climate information.  They should understand that their exaggerated information undermines true progress:  reducing public confidence in climate information, weakening bipartisanship, and encouraging wrong decisions.  As a reader of this blog knows, I have put considerable effort in dealing with inflated claims.

2.  Slow down the use of carbon by supporting the revenue-neutral carbon tax I-732 initiative.

If one accepts that increasing CO2 in the atmosphere is a problem (and it is), then using economic tools to reduce it makes sense.   There are two ways that have been proposed:  cap and trade and a carbon tax.   The Governor and some environmental advocacy groups have been pushing cap and trade, but the truth is that cap and trade has a history of failure.   Even the international climate group IPCC has noted this.  Furthermore, the cap and trade crowd want to use the funds from selling carbon use for social and other programs.  This is not acceptable to many Republicans, who are not fans of additional taxes. 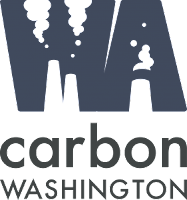 The alternative is a revenue-neutral carbon tax, something supported by folks throughout the political spectrum and by many economists.   An initiative to make this happen in Washington State, I 732, is rapidly gaining signatures.  It puts a modest fee on carbon and uses the proceeds to reduce the sales tax by 1%, lower the B&O tax, and provide tax credits for lower-income folks.  It would make our State's tax structure more progressive and encourage lower use of carbon.  A win-win situation and one that deserves widespread support on the right and left (the I732 web site is here).   Amazingly, a few "progressive" environmental groups (e.g., Alliance for Jobs and Clean Energy) are not supporting I-732--they want support for their pet social programs.   They are not being helpful.

The truth is that we are not resilient to current extreme weather.  And we are certainly not ready for the impacts of the expected climate changes of the late 21st century.    Here are some examples of efforts that need to be done to increase resilience that could be completely bipartisan.

*  Fix our Eastside Forest/Fire Problem.   During the past decades we have seen many big fires over the eastern Cascade slopes, the Okanogan, and elsewhere.   Experts note that the big problem is NOT climate change.   It is that ill-conceived fire suppression and other forest practices have allowed our forests to evolve to a state radically different than their pre-settlement conditions in which widely spaced trees and natural grasses burned frequently but with less intensity.  I mountain bike frequently along the eastern slopes and see the mess we have made....dense undergrowth, slash debris everywhere, high density of trees.   A degraded forest that can burn intensely. And an invasion of non-native grasses than burn fiercely (e.g., cheatgrass) have spread within and below the forests, producing flashy, intense fires. 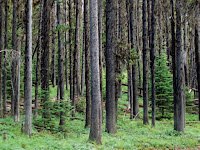 Forest experts know what needs to be done:  a massive effort to restore our eastern WA forests, by thinning the trees, removing and burning the debris between them, and restoring frequent fire to the forests as had occurred for millennia    It will cost hundreds of millions of dollars to fix this and some of our leaders (like Senator Maria Cantwell) understand what must be done.  The State's investment in fixing the forests have been minuscule and the Forest Service's raiding of the forest restoration budget for annual firefighting has been a disaster.

And as I have noted in a previous blog, weather forecasting support for wildland firefighters needs to be greatly improved, particularly for fires at an early stage.

*  Build Water Resiliency.   We are lucky to live in a region with enormous water resources.  Our best projections for the next century are that global warming will bring MORE water to our region, particularly in the winter.  But warming temperatures will reduce our snowpack, which is an important way that we store water.  And warming temperatures increase evaporation during the warm season, increasing water needs for agriculture and increasing wildfire danger.

So what do we do? First, we need to use water better, particularly in agriculture.  That means more drip irrigation, lined and covered irrigation canals, less daytime spraying, and a better mix of crops (less alfalfa and more grapes!).  Second, we need to consider more reservoir water storage to capture the winter rains.   The Yakima Integrated Plan moves in the this direction and other areas (like Seattle) could add to reservoir capacity to store winter precipitation.

Increasing numbers of folks are living in environmentally dangerous places, like in the flood plains of rivers, below unstable, steep slopes, and in forested/grassland areas that frequently burn.  They not only endanger themselves but the folks that are called to save them, when floods, landslides, and fires occur.  The State needs to clearly identify these dangerous areas.  Land use planning and building codes should discourage new homes on environmentally risky places (like in the bends of rivers or on forested fire-prone areas).   Folks living in such areas should be required to take prudent protection steps (like removing wood and flammable vegetation around eastern-slope homes).    And when possible, governments should buy out property in very dangerous places and forbid later development.  Tens of thousands of home are in bad places....what are we going to do about it?

4.   Reduce our carbon footprint where it makes sense

Because of hydropower, our region already has a relatively low carbon footprint.   But we are still wasting huge amounts of energy and produce large amounts of carbon unnecessarily.  And little is being done to address this.

One example:  the traffic disaster of the Puget Sound region.  There has been an extraordinary lack of leadership in Seattle and neighboring communities about transportation and traffic.  Huge amounts of gas is burned by the increasing grid-locked traffic of our area, even with improvements in fuel efficiency.  Traffic also hurts the economy.  There is an acute lack of bus service, both within Seattle and between Seattle and the neighboring communities.  Bike paths are left to rot and there is still no safe bike route into downtown Seattle.  The light rail system grows at a glacial pace, with terrible
decisions being made (no parking near stations), routes in conflict with cars, and much more.  The city has no coherent, integrated plan for transportation and it shows.   And innovative approaches (like using boat transportation) are never discussed.  We need to build a coherent plan and act on it expeditiously.   But it will take real leadership, which has been lacking.

Another issue is the coal and oil trains, which cause traffic jams, pollute our air, reduce rail capacity for important cargo (food), and which will result in massive increases of greenhouse gases.  This is a lose, lose, lose, lose proposition for us.  Our political leadership needs to stop the oil/coal trains and prevent the building of a massive coal terminal near Bellingham. 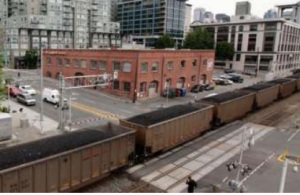 5.  Develop the technologies that will eventually solve the greenhouse gas problem

In the end, solving the greenhouse gas problem will be based on science and technology.  Folks in the third world want to live like us and we ethically can't deny them that, so the need for energy will continue to grow.  Few regions have more technological capability to attack the problem than ours: to develop new energy sources, increase energy efficiency, and to remove CO2 form the atmosphere.  A region with UW, WSU, Boeing, Microsoft, Amazon, and hundreds of other innovative organizations should be able to make major contributions to dealing with the essential technological issues before us.  Maybe pull in the help of the Silicon Valley crowd.

In short, there is much that our region can do to define and understand environmental threats, increase environmental resilience, to prepare for the impacts of global warming, and to reduce our regional carbon footprint.  None of this is ideological or partisan.    It is based on science, logic, and common sense.  And we can move forward on this together.