Regional Climate Prediction: A Crucial Technology for the 21st Century

One of the most crucial questions of our time is

How will global warming from increasing greenhouse gases change the climate in specific areas of our planet?

Some local questions include:

If our society is to prepare our infrastructure and institutions to deal with climate change, we must know the answers to such questions.

To put it another way:

There is a lot of talk about global warming in the media and elsewhere, but no one REALLY wants to know about GLOBAL warming.

What folks really want to know is how global warming will change the climate in THEIR part of the world.  How will average conditions and extremes change locally?

What our society requires is the technology/science for Regional Climate Prediction.   Fortunately, the technology is now being developed to provide such regional climate prediction, something I will describe in this blog.  In fact, several of us are working on developing a state-of-the-science regional climate prediction capability at the University of Washington within the UW College of the Environment.

But before we go on, there is a key fact.

Global Warming is NOT going to be globally uniform.

The climate of the planet will change differently in different locations.  Different temperature changes, different precipitation changes---different everything.   There will be winners and losers.

How do we know this?   Because meteorologists run simulation models, called General Circulation Models (GCMs) that can simulate how the world's climate will change over decades or centuries. These GCMs are nearly identical to the weather forecasting models used to predict the weather but they have two main additions:  (1)  they are connected to ocean models that simulate how ocean circulations will change in time and (2) the gases in the simulated atmosphere can change over time (like more CO2).

You may ask:  how can GCMs predict the climate in 70 years when our weather forecast models lose skill after a bit more than a week?

The answer is that we can do this:  We are NOT trying to predict the weather with climate models, but the average conditions over seasons or years.   It turns out that the amount of radiation coming into and out of the planet has substantial control over average climatic conditions.  And this radiation is heavily controlled by the composition of the atmosphere.  Thus, if we can project the composition of the atmosphere, we have a good idea of the future climate.

We know this is true because the same models can simulate the average conditions of the current  (and past) climate of the planet when the models have the observed atmospheric composition.

Increased CO2 and other greenhouse gases will cause the earth to warm, and our models show it will not be uniform.   Below is an example showing the change in surface temperature during the 21st century over the planet assuming CO2 increases at the current rate (A2 scenario).   Not uniform at all.  The Arctic warms much more than any place.  The continents warm more than the oceans, and the eastern oceans warm more slowly than the western oceans.   Most climate models have a solution that looks like this. 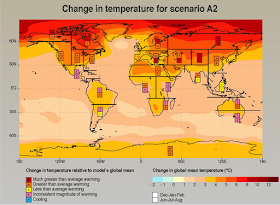 But there is a problem with the global climate models--they lack resolution, the ability to simulate local weather/climate details.   To run the whole globe at high resolution for a century would take too much computer power.   To illustrate this, on the left below is the terrain used in one of the highest resolution global climate models, the NCAR CCSM4.   No Olympics, No Cascades, No Puget Sound.  It can not get our local weather or climate correct, guaranteed.  On the right, is the terrain of a moderate resolution weather prediction model (12km grid boxes).  Most the of critical terrain is there.

Global models can get very large scale features correct, but can't deal with critical local terrain, surface, and water features.  How do we solve this problem?   Regional Climate Models (or RCMs).

The idea is this we run high-resolution RCMs on small domains for the same century, using the global GCMs to drive the boundaries of the small RCM domains.  This is called nesting. The high-resolution domains are small enough that our computer resources are sufficient.

Several groups are doing this, including several of us at the University of Washington (including the UW Climate Impacts Group).   Let me show you.  Here is the forecast of winter (DJF) temperature change predicted for the 21st century using the ECHAM5 global climate model.   No local details at all.  Doesn't look very realistic. 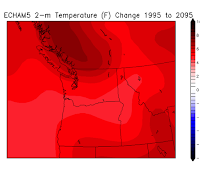 And here is a simulation from a regional climate model.  You can see the influence of terrain, with areas of very large warming due to melting snow on the slopes.  Much more warming and undoubtedly more realistic. 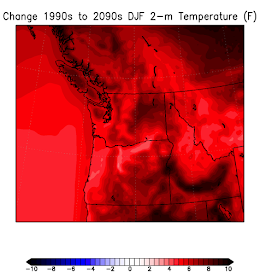 April 1 change in snowpack over the same period?  The RCM shows large melting over the Cascades and BC mountains: 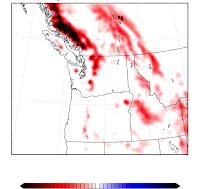 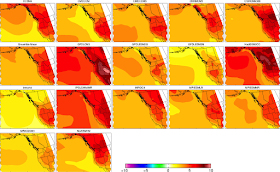 They vary quite a bit.   So one needs to secure many global climate models--something called an ensemble--and then run many RCM simulations to understand the local uncertainties in future local climate.

This has generally not been done because of lack of computer power and organization.

But here at the University of Washington, we are hoping to achieve this goal: producing robust local climate predictions based on large numbers of regional climate runs.  Our plan is to establish a consortium of local agencies, foundations, and others to support the development of the infrastructure to make a large number of regional climate runs for the Northwest and western U.S..  Enough runs to properly sample the forecast uncertainty of the next century.  Then we will perfect sophisticated statistical post-processing tools that will improve our forecasts further.

The goal will be to provide probabilities for changes in our local climate.   Projections of how extremes will change and much more.  For example, we can use the regional climate models to force hydrological and air quality models to help predict how water resources and air quality will change over the next century.  Or predict how upwelling in our coastal oceans will evolve.

More information about our proposed regional climate effort is here. 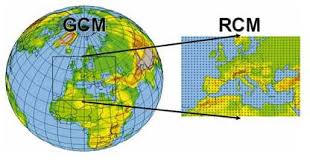 If you are involved in a local foundation, regional agency, or someone interested in investing in such an effort, let us know.  Once perfected over our area, the technology could be used anywhere. and probably could be the basis of a major new business one day.  The UW College of the Environment is fully behind this effort and Dean Lisa Graumlich is planning on committing a faculty line to the effort if it takes off.

Mankind seems determined to try the global warming experiment.  Regional Climate Prediction can hopefully provide robust predictions of what will happen, so that society can prepare as best it can.