Why does precipitation sometimes start at the coast?

It is not that uncommon to observe situations when there is virtually no precipitation offshore, but with showers starting at or near the coast and extending inland.  Often these showers are organized into closely spaced lines.

It happened this morning.   Here is the radar imagery for around 11 AM today (Thursday).     Not much offshore, but east-west lines of precipitation along the Oregon coastal zone. 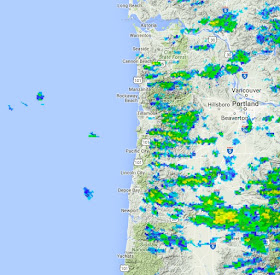 The cynical among you might note that the radar coverage is not that great offshore (although to be fair, the Langley Hill radar does get a good view of the northern Oregon coast).  So let's look at a high-resolution visible satellite image for about the same time.  Lo and behold, we can see the effect:  very little clouds over the Pacific, but definite lines of clouds (with showers) starting near the coast and extending inland.

Bottom line:  this is for real!

What about our high-resolution weather prediction models?   Here is the one-hour precipitation ending 10 AM from the uber-resolution (1.4 km grid spacing) UW WRF.   It is certainly trying to do the right thing.

So why are clouds and precipitation forming over land?

There are several reasons. 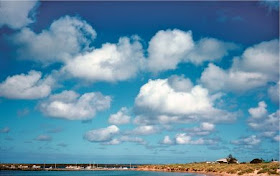 Second, as air moves from the aerodynamically smooth ocean to the relatively rough land, it slows down.   With air moving eastward fast over the ocean and slower over land, the air builds near the coast and is forced to rise.  Rising air causes saturation and clouds.   Thus, coastal convergence can initiate clouds and precipitation just inland from the coast.

Third,  since the coastal areas of Oregon and Washington have modest terrain, the incoming air is forced to rise, which can cause clouds and precipitation, as well as initiating convection.

Why are the precipitation and clouds organized into multiple lines with relatively regular spacing?

It turns out that there are hydrodynamical instabilities in the lower atmosphere that produce them.  A graduate of my department, Dan Kirshbaum, and one of my faculty colleagues (Dale Durran) did a paper on these features, which is a bit technical to talk about in this blog, but is found here.

The atmosphere is a pretty amazing creature with the ability to organize itself on multiple spatial scales simultaneously.