Why is Puget Sound cloudy when the rest of the region is clear?

It just isn't fair.   While nearly the entire region basked in sunshine, the Puget Sound basin had considerable cloudiness, breaking to partly cloudy skies for a few hours.   The satellite image at 3:40 PM tells the story (see below).  Even the coast had less clouds!

All the clouds caused the temperatures to cool down today, with much of Seattle not getting beyond the lower 70s.  This chilling story is illustrated by the UW Seattle weather observations for the last 3 days (below, time increases to the right).  The third row show temperatures (black line)--clearly cooler today.  The bottom row shows solar radiation.  On Saturday and Sunday we had clouds in the morning, but they were pretty much gone by noon.  Today, the solar radiation was suppressed much of the day. 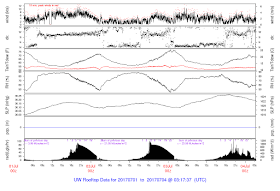 This Puget Sound cloudiness in summer is not rare...here is another example, from June 20.  I could show you a dozen more.

So why all the cloudiness over Puget Sound?  A plot by Jeff Bezos to keep his minions working?  No.  It is the result of northwesterly flow and a very big obstacle--the Olympic Mountains.

The flow approaching the coast this morning and early afternoon was northwesterly (from the NW), as shown by this short-term forecast for surface winds and sea level pressure (solid lines) for 8 AM.

An expanded version over Puget Sound shows the convergence quite clearly (the winds are parallel to the wind barbs): 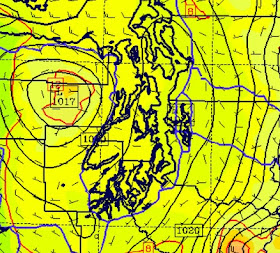 What you really want to know is about tomorrow.  Will the Puget Sound gunk stick around?    I have good news.  The answer is no.

Temperatures should increase by about 5 F on Tuesday and there will be far fewer low clouds.    The latest model run shows that some high clouds, now over the Pacific (see satellite image Monday evening), will move in over the region...but won't be a problem for the fireworks or anything else. 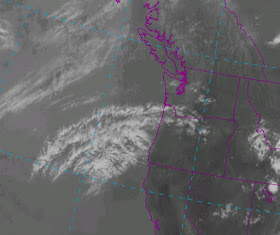 So enjoy the fourth..conditions should be excellent for the fireworks anywhere in our region.
Cliff Mass Weather Blog at July 03, 2017
Share