The August 21st Total Eclipse: The Meteorology is Favorable

On Monday, August 21st, there will be an extraordinary astronomical event:  a total eclipse of the sun will cross our region, and specifically northern Oregon.

The map below shows the area of totality (between the two lines), which will only last for roughly 2 minutes.  Totality will occur around 10:15 AM along the Oregon coast and about 11:30 AM at the eastern border with Idaho. 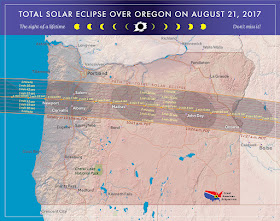 For the big population centers around Puget Sound and Portland, the most convenient locations will be between Salem and Albany, Oregon...less than an hours drive from Portland and four hours from Seattle.  Rooms are impossible to get east of the Cascades, but some are still available around Salem.

The big issue, of course, is weather.  But I think the chances, based on climatology, are quite favorable in the Willamette Valley on that date.  And I will give you some tips on being meteorologically adaptive.

August is generally a warm, dry month in Salem, Oregon.  In fact, August is the driest month of the year there. 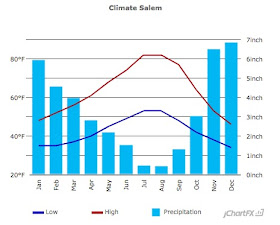 The risk of a major weather system coming in during that day is very slight.  The main threat is marine cloudiness, which is a far more serious issue for those hoping to see the eclipse along the coast.  The coastal mountains block a lot of the low clouds and the Willamette Valley is somewhat isolated from the coastal influence because there is no wide conduit from the ocean (like Seattle has with the Strait of Juan de Fuca and the Chehalis Gap).

To get an idea of the threat, I took a look at the visible satellite pictures at 11 AM on August 21st for the last 15 years.  Here is what I found around Salem, Oregon in terms of cloudiness:

The partly cloudy days either had some thin high clouds or some scattered low clouds.  You would still be able to experience the eclipse.  The cloudy day had a continuous low cloud layer.    If I was in Salem, Oregon under such conditions, I would head up into the Cascades on routes 22 or 29 until I got above the low clouds (see map). 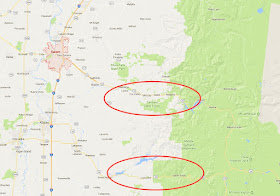 Eastern Oregon is obviously another possibility, with less chance of clouds.  But travel there is much longer, there are no rooms available, and the limited roads almost guarantee a huge traffic jam there.  And that region has another problem:  the potential for smoke, which has been an issue on that date in the past (see example from 2012). 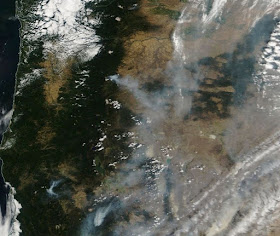 NOAA, using airport stations, has provided a map of probability of clear conditions on August 21st (see below).  The suggest 60-80% chance in Salem and 80-100% east of the Cascade crest. 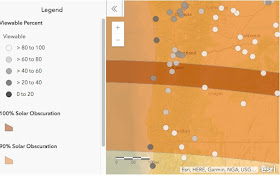 In the days before the event we should have good forecasts to work with, so stay tuned as we get closer in time.