It is more than a little disturbing.

Before the rains had ended, dozens of media outlets had published stories suggesting that global warming forced by humans (mainly by emissions of CO2 into the atmosphere) played a significant role in producing the heavy rainfall and resulting flooding associated with Hurricane Harvey.

Most of the stories were not based on data or any kind of quantitative analysis, but a hand-waving argument that a warming earth will put more water vapor into the atmosphere and thus precipitation will increase.  A few suggesting that a warming atmosphere will cause hurricanes to move more slowly.

This blog will provide a careful analysis of the possible impacts of global warming on Hurricane Harvey.  And the results are clear:  human-induced global warming played an inconsequential role in this disaster.

Why did Houston Get So Much Rain?

The proximate cause of the disaster is clear: the extreme rainfall was the result of a hurricane/tropical storm that pulled in huge amounts of water vapor off the Gulf of Mexico (and beyond), and which came into the Texas coast and then stalled for days.   All tropical storms/hurricanes bring large amounts of rain during landfall.  What was different here was the stalling and sitting over the same region for days.

So if you want to explain why this event was so unusual, you must shed light on the lack of motion after landfall of this strong hurricane/tropical storm.

And how much rain?  Here are the 7-day totals around Houston and the general area.   Over 20 inches in the region surrounding Houston (gray color), with the central areas getting 30-50 inches.  An amazing event. 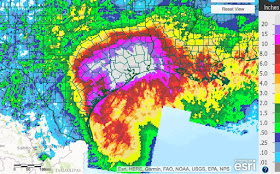 Let's analyze the two key questions:
First, let us examine what we call the thermodynamic effects:  increasing temperatures and moisture.

As air warms it can "hold" more water vapor, which can lead to heavier precipitation as the air enters a storm and rises.  In fact, more water vapor can also help rev up a storm as well, since when it condense it releases "latent" heat.

For the Texas coast, the temperature of the Gulf of Mexico will be critical, because the air that reaches the Texas coast will have passed over the water.

So how much has surface water or air temperature warmed up during the past decades?  One can go to the NASA GISS website and get the surface temperature change over the past 50 years during August.  The Gulf warmed by .5-1 °C between 1967 and 2016.  Pretty modest. Some of this was natural and some of it was forced by mankind. 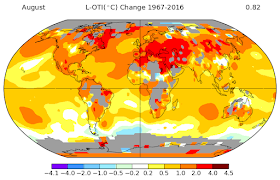 But what was the SST anomaly (difference from normal) during the period that really counted here: the week before the hurricane. The NOAA sea surface temperature anomaly for August 20 to 26th showed .5 to 1 C warming above normal in the sea surface temperature for the northern Gulf of Mexico.  Less for the southern coast and right off Texas. 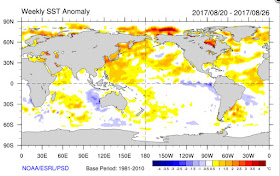 What about the air temperatures over the region in the previous days?  Were temperatures warmer than normal?  No...close to normal (white color)

So Hurricane Harvey developed in an environment in which temperatures were near normal in the atmosphere and slightly above normal in the Gulf.    The clear implication: global warming could not have contributed very much to the storm.

OK, let me go out on a limb. Let us assume that all of the .5C warming of the Gulf was due to human-caused global warming.  That NONE of it was natural.  And that the air was warmed by the same amount. Using the scaling described above implies an increase of 3.5% in the extreme precipitation of this storm.  So for places that received 30 inches, perhaps 1 inch resulted from global warming. Not much.  Immaterial regarding impacts or anything else.

Well, some of you might ask.  Is there any evidence of global warming producing heavier precipitation along the Texas coast?   Surely, if warming was evident and it was significant, precipitation would be increasing over time!

Well, here is the July to October (hurricane season) precipitation for the coast around Houston for the past 50 years.    Lots of ups and down but no trend.  In fact, if there is any trend it might be down. 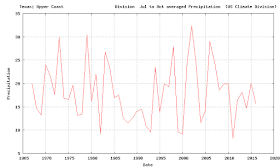 I could show you a lot more, but bottom line in all this is:

Now, lets examine the second question.   Is there any evidence that global warming caused the storm to slow down?   Some of the media stories had all kinds of hand-waving speculations.  Such as the jet stream would be weakened and become "lazy" due to global warming.

Quite honestly, none of this is supported by observations or models.

The wind pattern that produced the stagnation is shown in the figure below, which shows the zonal (east-west) wind anomaly (difference from normal) at mid-levels in the troposphere (500 hPa) for August 18-25th.  A reasonable level to evaluate the steering flow for the storm.  Note that the zonal winds are more negative than normal (blue colors) over the Gulf, which implies stronger flow from the east (the convention is that winds going west to east are positive).   In contrast, there are greens and yellows over central Texas and to the west, implying more westerly (from the west winds), which would tend to slow the storm down.  So the large scale flow might accelerate the storm towards the coast and then slow it down.

But do we expect global warming to produce such a pattern of anomalous winds wind over the Gulf?  Are some of the media and "activist" scientists correct in saying that winds over the Gulf will slow down under global warming?   Let's find out.

First, let me show you the change in zonal winds over the Gulf of Mexico for the past 50 years at 500 hPa.  No real trend.   Other levels showed the same thing. 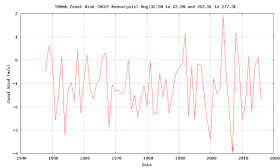 Tom Hamill, a scientist at NOAA ESRL, plotted the average hurricane speed in the region (20-30N, 50-100W), which I show below.  He also shows  (wisely) the number of samples (hurricanes) each year, since the reliability of the average declines when there are few samples.  It is clear that there is little trend, particularly when one only considers the years with decent samples.

Let me stress that it is the trend over the entire period that would suggest an impact of global warming, NOT some transient change over a few years. 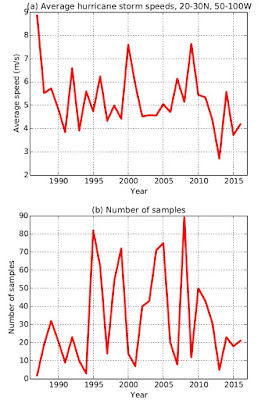 What about the future?   Atmospheric scientists run global climate models driven by increasing CO2, with a large collection of runs being available (the CMIP5 effort with around two dozen models).   I did a paper with Matt Brewer analyzing these models (published in the peer-reviewed Journal of Climate) and below is figure from it, which shows the difference in the zonal (east-west) wind  at 500 hPa between the late 20th and 21st centuries for July and August.   Little change over the Gulf and that is AT THE END of the 21st century.  Little would change now. 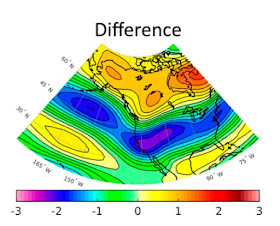 The bottom line in this analysis is that both observations of the past decades and models looking forward to the future do not suggest that one can explain the heavy rains of Harvey by global warming, and folks that are suggesting it are poorly informing the public and decision makers.

They are using hand-waving arguments to push an agenda, which observations, theory, and modeling show to be incorrect.  Global warming is a serious issue and mankind must deal with it, but hype and exaggeration of the current effects is counterproductive in the long term.

By the end of the century, increasing atmospheric moisture will increase the intensity of heavy rain in many locations, including the Northwest.   Although there is no evidence of increased hurricane frequency during the past several decades, some studies suggest enhancement of the number of the strongest hurricanes by the end of the century.

One does not need global warming to explain extreme weather--sometimes the factors come together to produce an unusual event... think of it as a meteorological royal flush. 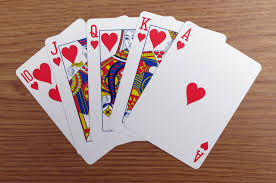 What the media SHOULD be discussing is the lack of resilience of our infrastructure to CURRENT extreme weather.   Houston has had multiple floods the past few years and poor planning is a major issue.  When you put massive amounts of concrete and buildings over an historical swamp, water problems will occur if drainage and water storage is not engineered from the start.

China may be ahead of us in such planning, with a huge investment in their sponge cities program in which they are investing hundreds of billions of dollars.  Blaming global warming makes it easier to neglect the infrastructure investments that are required to protect our cites.

Can you imagine if President Trump announced an infrastructure program to make our nation more resilient to CURRENT extreme weather?   A bipartisan effort to deal with extreme winds, flooding, rain, drought, and other severe weather? 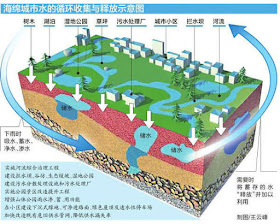