Are California Coastal Wildfires Connected With Global Warming: The Evidence Says No

California's coastal mountains have been hit by two major wildfire events, resulting in dozens of deaths and billions of dollars of damage.

The first occurred on October 8-9th in the "Wine Country" north of San Francisco.  The second started on December 4th in Ventura County and now has spread south to Los Angeles and San Diego.

A number of political leaders, media outlets, and activist groups have boldly stated that these fires were caused by, enhanced by, or consistent with climate change forced by anthropogenic global warming.

Governor Jerry Brown has made it clear that the fires are a "new normal" forced by global warming.

The NY Times has made the same point: 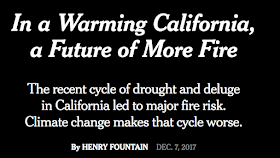 And quite honestly, I could easily give you dozens of additional examples of the such claims.  That global warming is a key element driving California coastal fires.

Let me demonstrate this to you, with facts, peer reviewed papers, and the best science can tell us.

First, some facts everyone should agree on:

1.  That wildfires took advantage of an environment with sufficient dry fuels (e.g., grasses and shrubs) to support fires.
2.  The initiation of the wildfires were associated with the onset of strong offshore (northeasterly) winds that developed as high pressure built into the intermountain West.

The question, of course is whether these elements had anything to do with global warming.  As we will see, the answer is clearly no.  And we will also see that there is a slew of other elements (prior fire suppression, irresponsible expansion of homes, influx of invasive grasses) that have made the situation much worse. 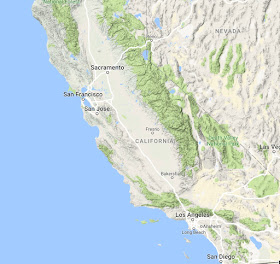 Did Global Warming Produce Drying That Led to the Fires?

The simple answer is no.   Coastal California has dry summers because the jet stream goes far north during the warm season and they don't have many thunderstorms because of the relatively cool Pacific.   So grasses, shrubs, and other fuels will be dry by the end of summer and during fall, no matter what.    And even if the fuels weren't dry, they would dry within hours of the initiation of strong, offshore winds--which accompany virtually every major fire event.

So if the summer/fall precipitation and temperatures are not important, what about the quantity of fuels?

This year there was a bountiful crop of grass in southern/central coastal California because last winter was so wet.  And there a number of studies that document that heavy precipitation the winter before results in more grasses that contribute to wildfires the next summer and fall.

There is NO reason to expect global warming has or will provide southern California with MORE winter rain.   Here is the winter precipitation trend from the latest U.S. national assessment (last 30 years minus the first half of the century).  Very small changes, with varying sign over coastal CA. 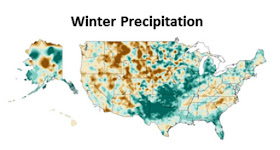 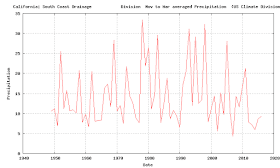 Looking to the future, Deser et al., 2012 completed a large ensemble of climate simulations for the period 2005-2060.  They found drying over the California in the ensemble mean for the winter season (DFJ) (below) 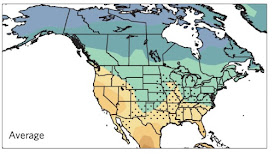 Other climate simulations have provided a variety of solutions, most with drying in southern California grading to moistening over the Pacific Northwest.

Bottom line:  no reason to suggest that the excessive winter rains this year and subsequent bountiful grasses have much to do with global warming.

Ok... so the summer conditions are not relevant because the fuels are dry enough to burn in any case, and there is no indication of increasing winter rains and more grass from global warming.  Some may argue that global warming is delaying the onset of precipitation in the fall, which might contribute to a longer fire season. In fact, Governor Brown said this.

But two facts contradict such a suggestion.  First, there is no trend in late fall (October to December) precipitation over the southern CA coastal zone (see below).  Here is the proof.  And there is no downward trend in December precipitation either (see second plot). 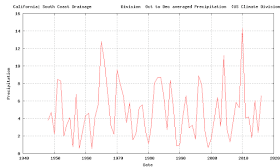 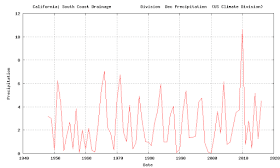 And in any case, southern CA climatologically gets very little precipitation during the fall--and this the impacts are minor.  For example, at downtown LA (see below) Sept. and October get .5 inches or less and November only 1.25 inches.  Not enough to make much a difference when a strong Santa Anna wind is blowing.

The bottom line of all this is that observations and the best scientific reasoning do NOT suggest that global warming is enhancing CA coastal wildfires through effects on temperature and precipitation.

So what is left to consider?

The two big events this year, and a deep collection of peer-reviewed research reports show that virtually every major coastal wildfire event has been been associated with strong offshore winds.  In southern California they are known as Santa Anas and in central California as Diablo Winds.  The meteorological set ups for these event are very similar:  surface high pressure builds in across the intermountain west, establishing offshore winds at crest level of the regional terrain, and an offshore pressure gradient at lower levels.  The pressure pattern at 4 PM Tuesday illustrates this pressure configuration at the surface (and the upper air map at 500 hPa--roughly 18,000 ft-- at the same time is also shown).  Note the position of the upper level ridge:  just off the Pacific  Northwest. And you can see the strong offshore flow at higher levels in the 500 hPa map. 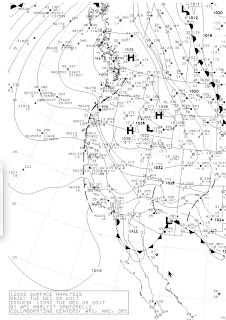 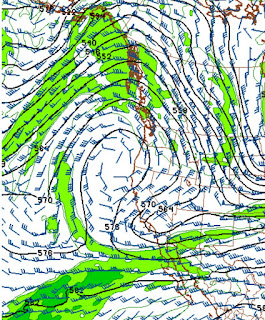 So the question is whether this ridge pattern and the offshore flow it produces has become more frequent during the past few decades due to global warming, something that is being claimed by some folks that suggest that a Ridiculously Resilient Ridge is becoming more frequent (e.g., the work of Swain and Diffenbaugh).    I won't get into the details of these papers, but they have scientific and technical issues, and fail to provide any real evidence of a long-term trend in West Coast ridging.

Let's see if observations support their claims.  Are upper high pressure ridges becoming more frequent just west of the Pacific Northwest?  Using the reanalysis grids available from NOAA ESRL, I created a time series of the heights/pressure in this critical area for the cool season (November to March)....see below.

The major drought year (2015) had a big positive anomaly, but looking back several decades indicates little upward trend, particularly after 1975 when there was a switch in the sign of a major north Pacific mode of natural variability, the PDO.   Bottom line: there are no long-trends of ridging that would produce more offshore flow or increasing droughts. 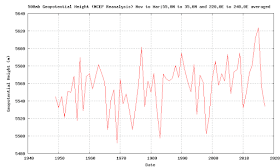 A recent, highly publicized paper (Cvijanonic et al) has suggested that reductions of arctic sea ice results in greater ridging along the West Coast (see figure from their paper).  But there has been a large loss of sea ice the last few decades and no trend in the ridging in the exact position they talked about.  So their hypothesis does not seem well founded. 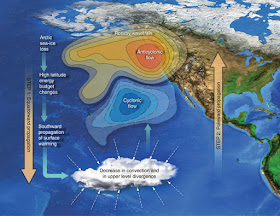 What about easterly (from the east) flow over southern California for the Santa Anna season (Sept to Nov)?  As shown below, there is no trend toward more offshore (easterly) flow (negative numbers) over the region. 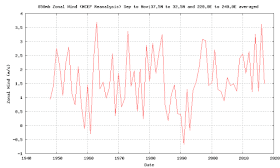 There are several papers (e.g., Hughes et al. 2009,  Hughes et al. 2011) that have examined the issue of whether Santa Ana winds will change under global warming.  Their findings based on both historical data and climate simulations for the next century is that Santa Ana winds have not increased in magnitude/frequency and will be reduced under global warming.  Yes, reduced.  And this makes sense.  Part of the forcing of Santa Ana is the difference in temperature between the interior and the ocean.  A very robust finding of virtually all climate models is that the interior of the continent will warm more quickly than the eastern Pacific.  Thus, warming should WEAKEN a major forcing mechanism of Santa Anas.

What about the observed trends of major wildfires over coastal California during the past decades?  Any evidence of a GW effect?   Dennision et al., 2014 published a comprehensive paper about western wildfires, finding a REDUCTION in major wildfires over the coastal region from San Diego to San Francisco.  Here is a plot from their paper.  Totally consistent with everything I have described above.  Totally inconsistent with the claims of Governor Brown, some climate activists, and a too many media outlets.

Finally, any consideration of the origin of any trends in wildfires must consider that humans are the cause of fire ignition for most California fires.   An article in the Proceedings of the National Academy of Sciences (found here)  noted that 84% of  U.S. wildfires were initiated by humans, with particularly high human ignition over southern/central California.   This is not surprising considering the population density and lack of lightning over the region.

Putting it all together

Considering the results of numerous studies of wildfires over coastal California and its relationship to prior and concurrent conditions, observed trends in key meteorological drivers, and even the number of major wildfires themselves strongly suggests there is no credible evidence that global warming is causing an increase currently or will increase in the future  of the number or intensity of wildfires over coastal California from San Diego to the SF Bay region. 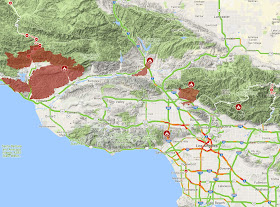 Those that are claiming the global warming is having an impact are doing so either out of ignorance or their wish to use coastal wildfires for their own purposes.  For politicians, claiming that the big wildfires are the result of global warming provides a convenient excuse not to address the real problems:
And to be extremely cynical, some politicians on the left see the fires as a convenient partisan tool.

Wildfires are not a global warming issue, but a sustainable and resilience issue that our society, on both sides of the political spectrum, must deal with. 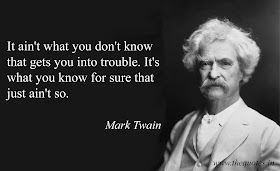