After over a week without rain, precipitation will soon return to the Pacific Northwest.  But not much.

Morning temperatures will warm, freezing fog will lessen super temperature inversions will fade, and the hated Southern California wildfire smoke will leave our region for good.  But the ridge of high pressure is not done with us, continuing in a weakened form.

Today and Thursday should be dry, but by Friday, the probability of precipitation will increase---withe light rain Friday, Saturday, and into next week.

Let's look at the forecast upper level maps.  One valid at 4 PM today shows a ridge (high pressure) over us...and you can see the weak upper level disturbance (trough) over Idaho that brought some clouds yesterday.

The map for Friday at 10 AM shows a modest upper level disturbance passing through, depressing the ridge.  Clouds and perhaps some light showers.

But fast forward to Sunday afternoon at 1 PM.  The ridge is still there, but pushed southwards, and we are in the northern portion of it, with strong flow going into northern BC.

The 72-h precipitation total ending 4 PM Friday shows unremarkable precipitation over Washington and Oregon.  Even the north Cascades only gets a few tenths of an inch.

Snow in the mountains?  You don't want to know about it.  Not much during the next week.  Best bet is north, up at Mt. Baker and Whistler.

Finally, the smoke issue.  Yesterday, a lot of California smoke reached the Northwest (see midday image from the NASA MODIS satellite below) 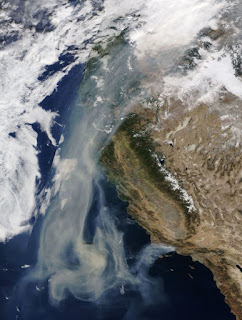 Here is a close up view centered on Oregon.   Yuk.   Look closely...do you see a lot of fine lines?  Those are aircraft contrails.  You can also see the darkening effect of the smoke over the low clouds of eastern Washington. 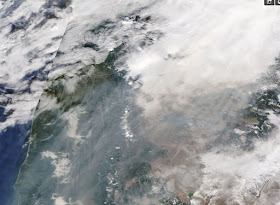 The forecast models are moving he smoke out and it should stay out for the rest of the season.    A California import we don't need.