Panic and the Coronavirus: Is There is Better Approach?

See my new blog on this:
https://cliffmass.blogspot.com/2020/04/flying-blind-on-coronavirus-why-random.html


Our society is now transitioning into panic about the coronavirus.

Universities and schools are being shuttered, sports activities and public gatherings are being cancelled, individuals are hoarding toilet paper and supplies, travel is being severely constrained, the stock market has crashed, and business activity is nose-diving.  Major businesses are forcing their employees to work at home.

This blog will try to summarize the coronavirus threat, suggest that some of the panic-driven actions may not be well-founded, and that there may be a far better, more effective approach to deal with the virus. 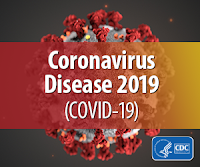 Before I begin, let me note two things.   I am not a medical doctor, epidemiologist,  or viral expert. But I am a scientist with some facility with statistics and data, and my specialty, weather prediction, is all about helping people react appropriately to estimates of risk.  And I have talked to a number of doctors about this issue.  But don't read any more if my background bothers you.

How Bad is the Situation Today?

If one steps back and looks at the actual numbers, particularly against other threats we face, the situation is far less apocalyptic than some are suggesting.   As of today, the Centers for Disease Control and Prevention (CDC) notes 1215 cases and 36 deaths in the U.S. since January 1.  This is a very, very small percentage of the U.S.  population of 331 million.   The number of U.S. cases no longer appears to be going up as rapidly, as noted by the latest CDC graphic (see below).  Note the drop after the peak in early March. 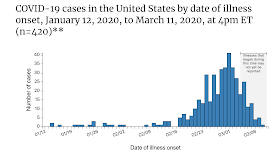 In China, where the problem started, the number of cases is rapidly declining (see below). 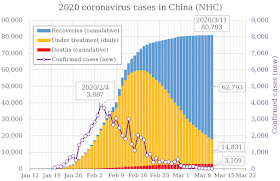 According to Washington State's Department of Health, the state has had 457 coronavirus cases and 31 deaths.  Most (23) of the death's in Washington have been limited to one nursing facility in Kirkland with a large number of elderly, chronically ill patients.  In fact, according to the NY Times, this facility would typically lose 5 patients a month.

This facility also represents about 50 of the coronavirus cases in Washington, since several first responders and staff were sickened (with no fatalities) due to exposure at this site.    In many ways, the Kirkland facility represented an unfortunate random event--the random exposure of a group of extremely vulnerable patients.    If this random exposure had not happened, Washington State would probably not be getting headlines as a center for this virus outbreak.

An extremely important element of this coronavirus outbreak is that it hardly sickens young people, and healthy individuals of middle age or younger generally do not face a life-threatening illness.  To illustrate, here is the age distribution of cases in King County.   Few folks under 40 are sickened and none of them died.  The problem is with the sick and elderly.  This age distribution is going to be very, very important.  Similar statistics are found in China.

There are undoubtedly many, many cases of coronavirus infection in the younger, healthier members of society, many of which are not aware of their infection.  But without testing, we don't really know other than by indirect statistical approaches.  Thus, the "death rates" are clearly far too high, and highly deceptive.

Comparison to the Flu

It is important to note that the coronavirus numbers are extraordinarily smaller than those of the flu.

Coronavirus is not even in the same league as flu, which also kills the youngest among us. We did not close down universities, businesses, and more for flu.

Interestingly, many who are panicking about the coronavirus today, refused to get a flu shot in past years, or to practice reasonable hygiene when flu is around  (e.g., washing hands carefully).  Coronavirus is also not in the same league as auto accidents, which kill 1.25 millions a year (3287 deaths a day), with 25-50 million injured or disabled for the worldwide statistics, while about 38,000 die in the U.S. each year from auto wrecks.

Are our political leaders shutting down society for the flu or stopping auto travel because of deaths on the roadway? The answer is no.  So why are they willing to close down society to deal with the coronavirus, which has represented only a small smaller risk to the general population?  Life is full of risks that must be considered, mitigated, and dealt with.  But society must continue to function.

Poor Response and Lack of Testing 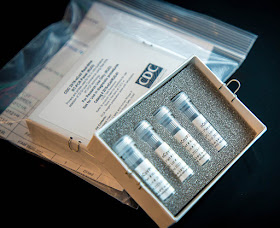 As the virus began to spread in China, the U.S. needed to develop a coherent plan for understanding and dealing with the crisis.  This did not happen.   President Trump probably made the right call about cutting off travel to China, but the lack of coherent planning beyond that is apparent.  The lack of testing is a major failure of his administration and others.

A key capability is to develop sufficient testing resources to determine the progression of the disease in the U.S.  This was sorely lacking, and the flawed testing developed by the CDC was one example of it.  Other countries have tested vastly greater numbers of individuals.  Importantly, the U.S. has not begun randomly test the general population to determine the extent of spread among U.S. residents.

The Extreme Cost of the Current "Social Distancing" Approach

Currently, the "social distancing" approach is being stressed by politicians and others.   The idea is that by canceling schools and large public gatherings, coupled with workers working online from home, there will be a reduction of coronavirus community spread, reducing the peak in the number of cases and put less stress on the limited resources of the medical community.  This is illustrated by the figures below.  You notice the number of cases doesn't change (the area under the curve).  And it has another issue:  it greatly extends the period in which society is affected by the disease.

The cost of social distancing is immense, something many politicians do not seem to have thought through.  The stock market is in free fall, the economy is tanking, colleges are poorly educating their students through questionable online learning, K-12 students aren't being taught, business is contracting, and workers are losing salaries and being laid off.  The lowest income folks are hurt worst, making "social distancing" highly regressive.   I have read estimates that that the world economy could lose trillions of dollars and that recession is now becoming more likely in the U.S.

Social distancing is attractive and even necessary for  a short period to slow the virus, but in the end it is not sustainable.  It is also inefficient.  In an attempt to prevent the virus from getting to elderly people with health problems, a huge population that does not have the disease or unlikely to get very sick from it is restrained from normal activity.  Something more effective is needed, something I would call "smart quarantine."  More on that later.

A number of the local politicians and others have been motivated to try massive social distancing based on a modeling study completed by several local researchers, suggesting only extreme social distancing can prevent a massive increase in cases and up to 400 deaths in our region.  This is a relatively simple model approach, which from my reading does not consider the variation of death rate with age, or the varying social interactions with age.  It assumes a uniform death rate of 1.6 %.   I think it would be useful to test an alternative strategy, based mainly on testing those that are not ill, and removing those people from social interaction.

Media, Politicians, and the Web:  How and why they can promote panic

The tendency for stampeding the population into panic and promoting actions that are in the end counterproductive is a real risk of the current political and media landscape.

For politicians, there is the potential for endless attention, with opportunities to give sober pronouncements and promote increasingly harsh measures.  Resources become freely available from a worried citizenry.  And the situation provides fuel to attack political foes, as is apparent with the attacks on Trump for virtually every action he takes (and some have been reasonable, like the China ban).  That said, President Trump is certainly guilty of underplaying the seriousness of the situation and providing inaccurate information.  The lack of testing is a massive failure.  There is, however, plenty of bipartisan blame to go around for ineffective responses.

For the media, the situation is a bonanza, with huge increases in attention, which promotes more "clicks" and revenue. An increasingly isolated and home-bound populace is glued to the constant media barrage, promoting fear and anxiety.

A highly connected population, unlike any population before, is unable to escape the incessant coronavirus coverage that is constantly featuring the latest death and shut-down.

So it there another way to deal with the coronavirus epidemic that could be more effective and far less cost to society?  I suspect there is.   This approach would take advantage of several unique and new aspects of the current situation:

Perhaps these facts allow us to deal with the situation in a dramatically new way.  If a rational actor was running the response, perhaps they would:

1.   Protect the most vulnerable with all available resources.  All nursing facilities, retirement homes, and the like would be essentially quarantined, with all patients and staff tested for the virus, with those testing positive isolated from the remainder.  All visitors would have to be tested.  All individuals who are over 60 and possessing serious health problems would be asked to self-quarantine, with food and other assistance provided to allow them to reduce contact with the outside community.  Governor Inslee has initiated some measures, more are needed,

2.  Extensive random testing of the general population would be initiated, with millions of tests available for this purpose.  Such general testing would allow a determination of the extent of COVID-19 spread and the isolation of affected individuals and their close associates.  This is what I call "smart quarantine"-- the use of massive testing to identify the carriers and currently sick and to take them out of circulation. 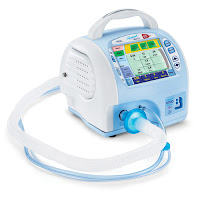 4.  Social distancing would end and all schools reopened within a month..   It is poor public policy to cripple education and the productive capacity of individuals that are the bulwark of the U.S. economy, particularly since most of them are not at risk for serious impacts of the coronavirus.  Sustained social distancing is not a long term solution.  Social distancing is just a short-term stopgap approach.  Massive testing and isolation should be put in place within weeks.

5.  Federal grants will be initiated to support additional hospital costs, the acquisition of additional medical supplies and equipment, and the huge testing program.

This measures would help pull the nation back from the brink of economic disaster, effectively restrain the crisis, and restore normal life to most individuals.

The American people have a long history of panicking when they are threatened, at enormous financial and human cost.  After 9/11, the American people agreed to loss of privacy and civil liberties, and allowed a tragic invasion of Iraq.  And after the attack on Pearl Harbor, fears of a third column led to the internment and loss of liberty of over 100,000 Japanese Americans.   Hopefully, fears of coronavirus won't lead to the unnecessary destruction of our economy and the undermining of the prospects of many Americans.  A creative solution to this crisis may be possible, acting as  bridge to the situation a year from now when hopefully a vaccine will be available.