I walked outside this morning in north Seattle around 6:45 AM and the smoke smell was very strong.   The expected worst (and last) day of the smoke is here and it is nasty.

The Seattle PanoCam this morning at sunrise clearly showed the shallow smoky miasma over the city.  Even the tops of some of the tall buildings are above the worst of it.

The calibrated Purple Air air quality sensors this morning shows the plume of terrible surface air quality exiting from the Skykomish Valley from the Bolt Creek fire, which then heads south over Seattle.   Purple colors indicate truly bad air quality.   Red is just bad.    The plume is relatively narrow...head east or west and you can get out of it. 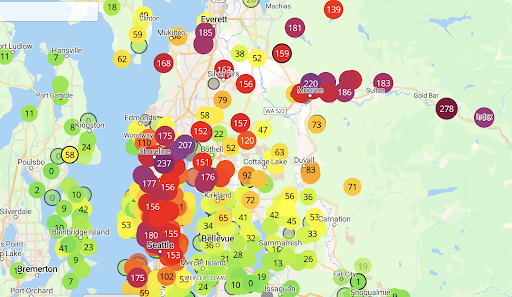 The Puget Sound Clean Air Agency has a ceilometer in Marysville that shows the vertical structure of the smoke plume at that site (which is a bit north of the worst of it).  The graphic (shown below) shows that the worst of it (yellow colors) was down low and moved in last evening.  Yuk.

The latest high-resolution visible satellite image around 7:30 AM really shows the smoke from the Bolt Creek fire exiting the Skykomish Valley and spreading out over northwestern WA:

So what is going on and when will it stop?
The Bolt Creek fire is really not spreading but is smoldering in the interior.  This has gotten worse during the past few days as temperatures have risen and relative humidities have plummeted.
Here is a plot of the relative humdity and moisture content of small dead fuels at the nearby Johnson Ridge RAWS site.  Yesterday, relative humidity dropped to around 10% and fuel moisture to roughly 6 %.
These are favorable conditions for fire.

The fire-favorable conditions have been driven by easterly (from the east) flow that unforunately pushes smoke into western Washington as well.
And the clear skies aloft and longer nights allow cooler/smoky air to settle into lower elevations and not mix vertically.   That is why conditions worse overnight.
But there is good news ahead.  Solar heating today should help mix the smoke through a larger volume of air reducing surface smoke concentrations.
Tonight, the pressure difference across the mountains will reverse, and cooler ocean air will move into the west.
Smoke time will be over for western Washington.  Unfortunately, that is not good news for the eastern slopes of the Cascades.
To illustrate, here are the near-surface smoke forecasts (from the NOAA HRRR smoke system) for this morning and tomorrow morning.  Good for Seattle, bad for Leavenworth. 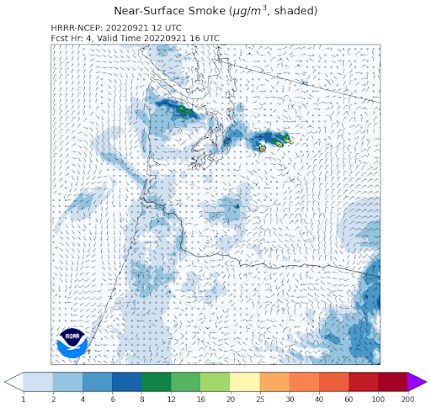 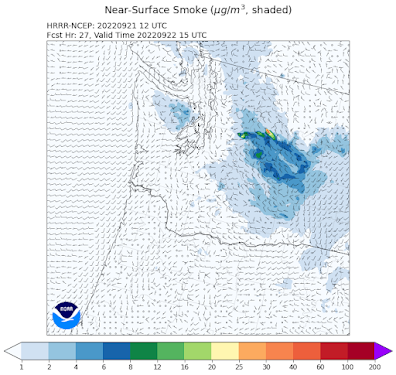 So if you are sensitive to smoke and leave in Puget Sound.....wait a few hours before taking that walk or run.  If you are living in east Washington....you better get your exercise in today....